If you've been following us through the year, you'll know that we have been raising salmon in our classroom tank. Back in December, we got about 50 eggs in our tank. Our eggs were eyed already, which means that there were already baby salmon growing inside them.

A few months after we got our eggs, they hatched! We got to watch the tiny Alvein break out of their eggs and wriggle around on the bottom of the tank. Alvein can't swim because they have a heavy yolk sac still attached to their belly. That yolk sac gives them the energy they need to grow!

As our Alveins grew, their yolk sacs shrank and they finally buttoned-up. Then they took their first trip to the surface of the tank! At the surface, they took a gulp of air and filled up their swim bladders. We learned that a fish's swim bladder is like a life jacket that helps the fish float. Now our Alvein are called Fry!

At the end of May, it was time for our little Fry to leave home! We carefully packed our Fry into a bucket, and set off for the Lillooet Lower Spawning Channel.


Our salmon made it safely to Lillooet with a bunch of Fry from Mr. Remple's class up at the high school. Mr. Remple even managed to rescue a few escapees from the concrete, so every last fish was able to make the trip! When we arrived in Lillooet, it was time to say good-bye to the little Fry we had raised. 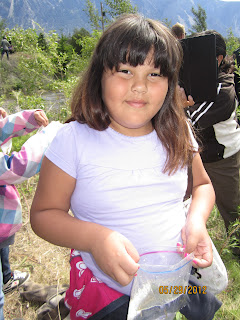 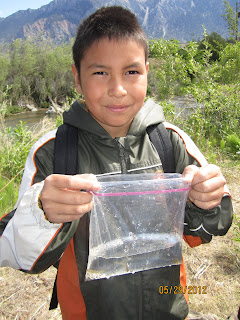 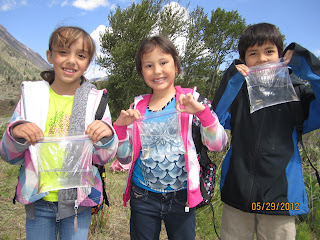 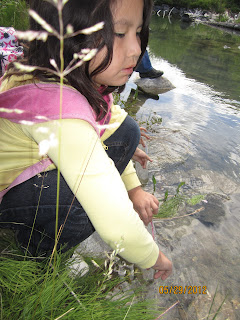 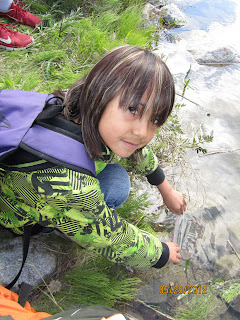 After releasing our salmon into the Spawning Channel, we were luck to go on a hike around the channel and explore our Fry's new habitat. The Lillooet Lower Spawning Channel was made by people to help Pink salmon, and now Coho salmon, regain areas to spawn and grow up. We learned a lot about what makes the Spawning Channel a great home for our little Fry.

The Spawning Channel is a great fish habitat! It is surrounded by trees and bushes and these are important for the salmon because they keep shade over the water and that makes it nice and cool. We also noticed lots of large rocks in the Channel. When the water rushes over the rocks, it makes little waves kind of like rapids in a bigger river. Those waves are important because they mix more oxygen into the water and the fish need that to breathe. Another important part of the salmon's habitat is at the bottom of the Channel - it's covered in gravel. Adult salmon dig their redds in the gravel, so without gravel there would be nowhere for the eggs to be buried!

We also discovered that the Spawning Channel is home to a lot of other creatures that are friends and predators of the salmon. We got to look up close at many different creatures along our hike.


One thing our Fry will need to start looking for right away is food! What does a tiny fish eat? They eat tiny creatures! In the waters of the stream, we found many tiny insect larvae and other creatures that the salmon prey on. 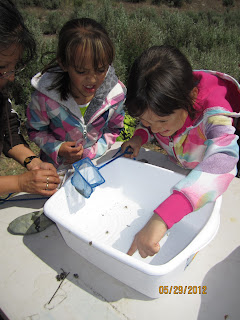 Our Fry aren't the only fish feeding on these tiny creatures, though. There are many different varieties of fish living in the Channel and they all need different things to survive. We took a look at some fish - big and small - that share a habitat with our salmon Fry.

Our Fry are only just beginning their journeys. After they grow up into Smolts in the Spawning Channel, they will leave the stream and head to the river. Once they reach the river, they will travel across British Columbia, from Lillooet down to Vancouver. They'll be heading for the coast! Once the reach the ocean, they swim up the coastline of BC, past Vancouver Island, and all the way up to the Arctic Ocean. It's a trip that will take years and thousands of kilometers to make. In the ocean, our salmon will eat larger fish and grow into adults. When they are ready to spawn, they will find their way back to the stream where we released them in Lillooet, and they will lay their eggs there! What an adventure!

Division 2 made an adventure of our own, pretending we were Smolts heading down the river towards the ocean. We had to work hard to "survive" the trip - passing lots of friends, predators, and human-made roadblocks on our way! Can you remember all the different challenges we faced as Smolts?

What did you see on your journey to the ocean as a Smolt? Was it a friend or a predator?

Share something new that you learned about Salmon on our trip!

What do you think it would be like to be a tiny Fry in the giant Spawning Channel?
Posted by MrsMikula at Sunday, June 10, 2012

Email ThisBlogThis!Share to TwitterShare to FacebookShare to Pinterest
Labels: Science